Promoting fishing in Lake Ontario excursion is more to promote. This privileged location of fishing is one of the few places in the world where you find trout’s and salmon’s in abundant quantity and quality. The weight of Chinook between 18 lbs and 25 lbs. For trout, were the “Steelhead”, “RAINBOW”, “SCAMANIA”, “BROWN” and “TOULADI” and the average weight ranges between 8 lbs and 12 lbs. Salmon “Chinook” & “COHO”, Lake Ontario are the most popular.

Remember experience are made to be lived … 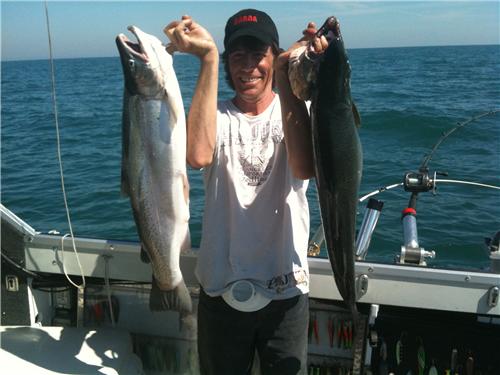 An additional 100$ for the fifth person

Pricing can changes without advice

The fishing trip must be booked at least 2 months in advance including a deposit of 300$.

Cash or personal check address to Sylvain Thibeault only

For any cancellation notice at least 1 month before the date of the tour.

Your deposit will be refunded only if these criteria are applicable:

We reserve the right to refuse certain customers for any reason whatsoever.

FROM QUEBEC OR MONTREAL

You can plan of 5.30 hours drive from Montreal.

What to bring on board

You must bring on:

For seasickness, we suggest and recommend stamps, bracelet, pills of scopolamina. 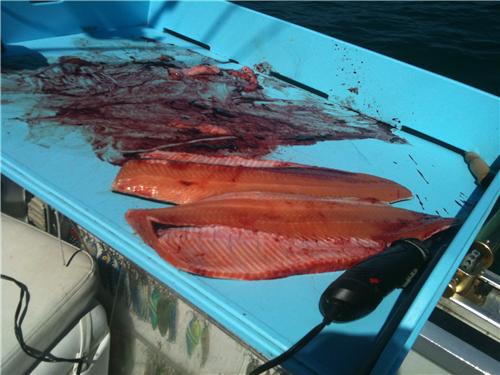 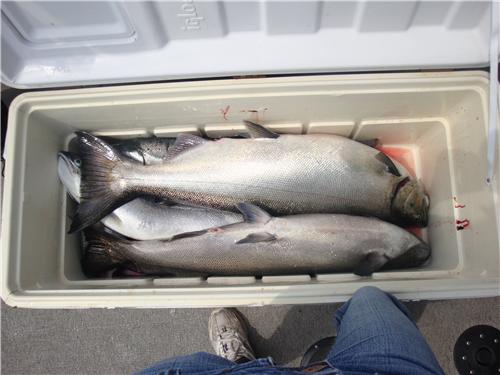 Ice is available at the Marina.

Others information’s – upon request

Fishing licenses of Ontario are required; Not Available on Site

Chinook salmon stands out by its black gums and tail and silver spotted. His back is a blue-green slightly mottled, and is the largest and most sought after game fish. The chinook lives from 3 to 7 years and weighs 1.5 to 30 kg. The Chinook medium are called “spring” in British Columbia, those over 13.5 kg are called “tyees” and in Alaska, Chinook salmon is called “king salmon” (king salmon).

Can be identified through the coho salmon that bears small black spots on the back and the dorsal lobe of its tail fin. When he saw the ocean, it is dark metallic blue or greenish on the back and upper flanks, silvery flanks and mid-lower sides and white on the abdomen. When the coho are ready to breed, his head and his back pass from dark green to light green, its sides become bright red Coho usually weighs between 3 and 6 kg and can measure from 60 to 76 cm.

The Brown Trout was introduced to the 1890 sports as a species because of its tolerance to water of lower quality. Indeed, it supports more hot water than brook trout, commonly called speckled trout. It is found in fresh waters of the river in several tributaries south of the river and lakes. Reproduction in the wild is low, sport fishing of this species is supported by stocking. In addition, it could compete with brook trout and Arctic char.

The rainbow trout (Oncorhynchus mykiss), also known as steelhead, is a unique species of trout native to the Pacific Ocean and in rivers in North America and western lakes of the Rockies. Rainbow trout are the smaller variety, found only in fresh water. Steelhead spend their adult lives in the ocean but return to spawn in streams where they hatched. The rainbow trout were introduced, at least 45 countries and every continent except Antarctica. They occur in cold streams up to 4500m altitude. Rainbows and steelhead small black spots along their back, dorsal fin and tail fin. Rainbows have a pink color that runs from the operculum to the caudal fin. The color of the back of a rainbow range of blue or green to yellow-green or brown. Steelhead usually do not have the pink band, except when it is young or spawning, and have chrome-colored sides. Rainbows are distinguished from their cousins​​, the cutthroat trout by their short maxilla, which reaches, but does not exceed the margin back of the eye. The rainbow trout also lack-hyoid teeth, this one based on cutthroat trout. Rainbows range of 30-45 cm (12-18 inches) long. Steelheads longer, ranging from 50 to 100 cm (20-40 inches) long. Steelhead range in weight from 2.5 kg to 10 kg.

Lake trout (Salvelinus namaycush) is a living freshwater tank mainly in lakes in northern North America. Other names to include Mackinaw, lake trout (or charr), lake trout, Togue, and lake trout. In Lake Superior, they can also be variously known as siscowet, paperbellies and looks. The lake trout is popular both as game fish and as food fish.